COMPANY  PROFILE WEEDCUTTER As our lakes become more and more infested with the green stuff, there’s  very little choice on how  to tackle the problem. Paul Middleton’s Weedcutter boat could be the option you  are looking for. 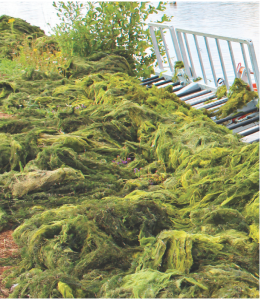 How to tackle weed is a serious problem for fisheries throughout the country, and if you’ll excuse the pun, it’s a growing problem. The options on offer are very limited, but Paul Middleton could have the answer. Here is Paul’s take on how to tackle the menace of weed and keep your fishery open “I think all fishery owners and managers are aware by now of the banning of aquatic herbicides by the EU, whether you used to use them and were immediately aware of the banning, or in more recent years you have found yourself with an increasing weed problem and then the realisation that there is no aquatic herbicide solution available. Either way, we are all in the same boat, me included. I have been running Limebrook Fishery since we designed and dug the lake from a wheat field some 8 years ago. Canadian pondweed found its way into the lake naturally, and over the course of the last 4 years has gradually taken over, rendering up to 70% of the lake unfishable. It’s extremely frustrating when you have just started to see the rewards of planting and stocking a lake come to fruition. We stocked Limebrook with carp from my own English Carp Fisheries fish-farming site, and they averaged 8-11lb. I wanted to let the fish grow on in the lake, and just as we had a nice syndicate developing, with fish starting to break the 30lb barrier, the weed slowly brought things to a halt. With fish regularly being lost and the potential for damage occurring to them in the process, it was clear the weed would have to be managed.

That is how Weedcutter.co.uk came about – to manage my own fishery and fish-farming waters. I wanted a boat that would deal with the specific set of circumstances found in carp fisheries. Weed harvesters are fantastic machines but the one major limitation is the depth to which they can cut, usually a maximum of 6ft. This means that any weed beyond that depth is untouched; Limebrook is 12ft deep in places and the weed was up to the surface in those areas. Our weedboat has a front T-bar hydraulically-driven cutter similar to the harvesters, which is fantastic at cutting from the surface down to 5ft deep. It also has a high tip rake attachment, which, most importantly, collects the weed and removes up to 300kg at a time onto the bank. But the trump card is our trailing knife attachment, which connects by chain to a hydraulic ram at the back of the boat. This pulls a large 2m-wide spring steel V-blade along the bottom in a jolting action; it cuts the weed at its root in depths of up to 15ft plus! It is designed in a way that it runs up and over underwater features such as bars and plateau, and follows the contours of the lakebed – perfect for fisheries. We can also cut reeds because we have another side-cutter attachment specifically for reed-cutting. The shallow 15ins draught of the boat and its awesome manoeuvrability allows us to get right into the shallows where reeds often overrun the area.

The boat is delivered to site on a trailer and 4x4 setup. We can launch even in the tightest of areas, which is usually the case with fisheries. Quite often we launch straight off the front of swims; we don’t need a slipway of any kind. We simply back the trailer close to the water, the railer then articulates and the boat is lowered into the water via a winch. We can launch and be running within 30 minutes of arriving at a fishery. This versatility means we can offer the boat for hire for as little as one day at a time if required. The daily hire includes our highly skilled driver, Steve French. Steve and I are both lifelong carp anglers, which I believe is vitally important because we both have a full understanding of weed and its effects on carp fisheries. We are not just contractors turning up to do a job; we are there to make your venue fishable again. More often than not we are called into fisheries that are at breaking point because the weed has completely taken over; ‘disaster recovery’, as Steve likes to call it, and it’s fantastic to leave venues fully fishable again and open for business. For us though, it’s not about the initial ‘big hit clear up’ and then leave you to it. Once the first main weed clearance is done we can help manage the ongoing fishery weed situation. It’s about keeping the weed under control and fishable throughout the season, so we recommend one or two well-timed cuts with the V-blade before it gets too thick and causes more problems. When the weed is still relatively low we can cut large areas very quickly and efficiently with the V-blade, and because there aren’t such large volumes of weed to remove, we can effectively cut a large area in much less time, making visits more cost-effective. 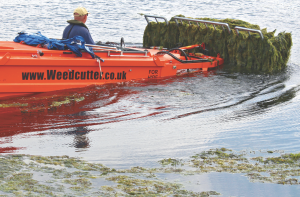 We did exactly this on Limebrook this year. The initial ‘disaster recovery’ big hit and then a second cut with the V-blade midsummer has kept the lake fully fishable. In fact it’s fished incredibly well in comparison to last year. August to January 2012 produced just six captures; it was painfully slow with the fish forever holed up in the weedbeds. Linelay was terrible, and if you were lucky enough to hook one there was no enjoyment in playing them from one weedbed to another. Since August this year there have been in excess of 50 captures already to the end of October. Yes, some fish are still lost in the weed, but only at a normal carp fishery level, which I can live with. Managing expectation is something I discuss with customers on my initial site visit. We can’t achieve a bowling green like lake bottom I’m afraid, it’s just not possible. Despite cutting the weed at the bottom, not all the weed has enough buoyancy to lift itself to the surface. We are here to make your venue fishable again and low-level weed is a healthy environment or any fishery. The natural food within the weed becomes more accessible to the carp – the Limebrook fish have experienced their best weight gains ever this year. Every fishery we cut bar none has shown an immediate increase in activity from the carp; it really is quite incredible to see. I expected the fish to be spooked by the boat and all the disturbance, but it’s quite the opposite. Although they do give the areas the boat is working in a wide berth, they regularly bubble up and show while the boat is still out on the water. The carp seem completely switched on by the cutting process, and every water we have been to has shown an immediate and dramatic upturn in activity and captures – very positive indeed. It’s rewarding to receive positive feedback. One of the most dramatic jobs we completed recently was a 10-acre no publicity venue. In my opinion, it was completely unfishable, with 80% of the surface solid with weed, which was then capped with an algae bloom. Yes, it was possible to put a rig into the odd clear area, but landing a fish in that situation was very difficult indeed. The weekend before we arrived, one member had hooked six carp at close range, landing only one. The weekend after we left the same angler hooked five carp, landing them all from 90 yards out! Steve bivvies up on the jobs, mainly for the security of the boat – well that’s his excuse anyway! If it’s acceptable with the venue concerned, he sometimes puts a couple of rods out at night in between cutting, and they rarely pass without action. He had a couple of great results when we were at Chilham Mill, taking a number of fish to low-30s from areas which were unfishable when we arrived. So if you have a weed problem and need a cost-effective ongoing solution to keeping your venue fishable throughout the season, every season, give us a call to arrange a no-obligation site visit and assessment.” Paul Middleton. CT The above is an article taken from carp trade magazine. Download the PDF by clicking here. Weedcutter PDF
?php dynamic_sidebar( 'footer_sidebar' ); ?